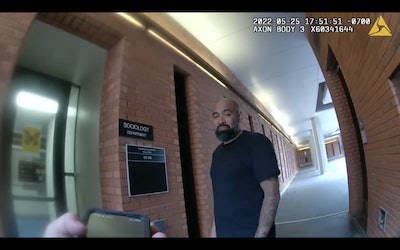 The Aug. 1 letter to CSULB President Dr. Jane Close Conoley and the CSU Board of Trustees is responding to a complaint made last month by the union representing CSULB police, which accused Osuna of misconduct and dishonesty and said the officer in question followed policy for campus doors.

On Jul. 27, the union released body camera footage of the incident, wherein the officer asks Osuna if he has photo ID. Osuna responded that he had lost his wallet that contained his ID and had left his keys and cellphone in his office. The officer was advised by a supervisor to not let Osuna enter.

“Such police encounters with faculty of color routinely begin with assumptions of suspicion and criminality on the part of officers, due to pervasive forms of implicit bias and structural racism, rather than from positions of collegiality, aid, and collaboration,” the letter wrote.

Faculty are asking the school to condemn claims made by the police union, saying that Osuna’s treatment was an example of systemic racism minimized to an administrative procedure issue.

Dr. Kimberly Walters, CSULB associate professor of international studies, said Osuna’s identity could have been verified in other ways.

CSULB spokesperson Gregory Woods said in a statement that CSULB did not believe the officer acted inappropriately.